Thousands and thousands of metal rivets, columns and girders compose the huge constructions pointing towards the sky around the world. The onset of the Industrial Revolution in the end of the 18th century changed the way metals were used in architecture. The use of metals in architecture spread through Europe between the end of the 19th century and the first half of the 20th century. The countries with that showed a wider use were France, England and Italy.

Architects such as Joseph Paxton or Gustave Eiffel, are among the first that realized about the importance of this material and the numerous ways to apply it in the construction of infrastructures and buildings; mainly because of its lightness and resistance.

Crystal Palace, built in the 1850 for the Grand International Exhibition of 1851 in London by Paxton, is one of the first examples of metal structures. The building itself was the most breath-taking exhibit of all: “It was as tall as the trees, indeed taller, because the building arched over two of them already growing there, as if, like giant plants in a glasshouse, they had been transplanted with no disturbance to their roots”. Paxton used glass and iron. Over 1,000 iron columns supported 2,224 trellis girders, 4,000 tons of iron, 30 miles of Paxton’s newlyinvented guttering and 202 miles of sash bar (1).

Subsequently, the Eiffel Tower, built between 1887 and 1889 for the Exposition Universelle of Paris in 1889 by Eiffel, represents a hit in the history of metal structure and of Paris itself. Still the tallest construction of Paris (29th in the world), Eiffel Tower boasts 324 metres of height.

The tower is made of 18,000 pieces that were calculated specifically for the project and prepared in Eiffel’s factory in the outskirts of Paris. Building the tower required 2.5 million thermally assembled rivets and 7,300 tons of iron. To protect the tower from the elements, such as rain or humidity, workers painted all the structure, a feat that required 60 tons of paint. The tower has since been repainted 18 times (2).

Later, in 1928, in the Big Apple, the architect Van Alen designed the
Chrysler Building, still today the tallest brick building with a steel structure in the world. It was the tallest building in the world for 11 months, until the Empire State Building was finished. The height of the skyscraper was originally designed to be 246 meters and not 318,9 m. 391,881 rivets and approximately 3,826,000 bricks manually laid soared in the sky of Manhattan (3). 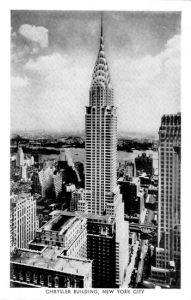 Thanks to the advent of metals and their use in architecture, we can see today how high the human being can reach and aspire all over in the world.