THIS IS TOMORROW – exhibition review

“Yesterday’s tomorrow is not today, so maybe today’s tomorrow
won’t be quite what you expected!”
‘This is Tomorrow’, London 1956

“An exhibition called ‘This is Tomorrow’ – devoted to the possibilities of collaboration between architects, painters, and sculptors – might appear to be setting up a programme for the future. There are powerful precedents for placing art in a time-perspective that relies on the future to complete it. Early modern art is full of theories concerning the integration of all the arts, with realisation of the ideals scheduled for another time. But yesterday’s tomorrow is not today – and the ideal of symbiotic art architecture has not been achieved […]” (1).

This was the first piece of information about the exhibition that, in 1956, the visitor could read in the catalogue of “This is Tomorrow”. Held in London at the White Chapel Art Gallery, the exhibition opened its doors for a month and received almost one thousand visitors a day, presenting the work of 36 participants that were approximately divided into two camps: Constructivist and, mainly, members of the Independent Group, known for their meetings at the Institute of Contemporary Arts (ICA) in London, with some overlap between the two groups. The IG “looked at, discussed, analysed, wrote about, designed, built and assembled a galaxy of highly significant work exploring contemporary culture as found” (2).

Novel materials, for instance the beginning of plastics, were influencing all areas of life, from the daily maintenance of the living space to the built environment as well as the production of art. This iconic show is important and still remembered because of its conception and realisation and because it is considered by critics and historians to be among the earliest works and precursors of pop art, focused on the popular culture while the mass production and the introduction of new technologies were celebrated by the media.

Inspired by this period, the idea of “This is Tomorrow” exhibition, was to create unique installations in an attempt to combine contemporary thinking from the fields of art and architecture. The exhibition introduced the radical concept of ‘cross-disciplinary collaboration’, following the idea of the ‘Gasamtkunstwerk’, and consisted of twelve groups. Each group was polymorphic, formed by three or four people among architects, artists, sculptors and theorists, basically professionals coming from different practitioners, and were asked to amalgamate their individual and personal approaches and produce twelve different displays by deploying a new methodology. The outcome was interesting and homogeneous as homogeneous was the composition of the groups. The exhibition, thanks to its modernist approach, challenged the prejudices of ‘high art’ and opened new horizons.

The aim of the show was to celebrate an excitement about the future and the probable-possible scenarios in front of them, simultaneously critically and sceptically, since they could not wait to move away from a “stuffy traditionalist establishment”. The installations were not intended to be finished pieces of art, instead they were speculative collaborative experiments focused on the possibilities of the near future. Moreover, it was a key moment for the British culture: both Pop Art and New Brutalism were the core of the event and act as witnesses of the transition from pre and after-war period to a new and modern society.

They pointed out that “yesterday’s tomorrow is not today.
There is no reason why a sculpture should be static, or
a painting should be pretty, and some of us should wait
until tomorrow to appreciate it. Where the sculpture and
painting end and the architecture begin is difficult to say
but, after all, that is the whole idea”. (3)

Each of the groups worked separately from the others but presented the final result as one environment. One of the groups that stood out most and presented an impressive work was, without a doubt, Group 2.

Composed by Richard Hamilton, painter and collage artist, John McHale, artist, art theorist and sociologist and John Voelcker, architect and designer, the group reflected on the Independent Group’s growing fascination with technology and American culture, displaying mass-market artefacts. The text presented in the catalogue stated: “Tomorrow may only be extrapolated on the basis of certain assumptions about the practical accepted reality of today and yesterday” (4) and “Tomorrow is released when experiences of instants past contact this instant, here, now” (5). The entrance of their installation presented an image of a human head as introduction to the total sensory experience of the visitor, and the room included: large scale Guinnes beer bottles, the Op Art dazzle panels, the Van Gogh Sunflowers, pop art readymade of a Marilyn Monroe from the movie ‘The Seven-year Itch’ and a Marlon Brando poster, collage Space modules, a film advertising billboard of the Forbidden Planet, a foam floor that released strawberry perfume, a 16-foot high Robby the Robot, a Jukebox, an endless reel of film illustrating the Royal Navy Fleet at sea, a ‘CinemaScope’ collage mural design of popular film imaginary and the design of the Pop art collage posters that were all made available by John McHale.

In addition, Hamilton designed a poster for the group’s installation called ‘Just what is it that makes today’s homes so different, so appealing?’. Realised with the collage technique, the work represents an interior domestic space. The poster shows a half naked bodybuilder man, the landlord, holding a lollipop and, close to him, a woman, also half naked, who is wearing a strange hat that looks like a lampshade. Next to them there are domestic appliances such as a TV, a vacuum cleaner and a recorder, then other popular elements like a comic poster, a big pack of meat and a lamp with the trademark of Ford. Finally, the view from the window shows the lights of a city and advertisements of theatres.

This could be seen as a criticism of the modern society where the consumption plays the most important role. However, as a matter of fact, he just tried to predict the future of the domestic space summarising it in 11 keywords: popular, ephemeral, expendable, cheap, mass products, young/fresh, witty, sexy, athletic, fascinating and oriented toward big businesses.

Moreover, another group that greatly attracted the eyes and interest of the visitors and the press was the Group 6, composed by: Eduardo Paolozzi, Scottish sculptor and artist, the English architects Alison and Peter Smithson and Nigel Henderson, English documentary artist and photographer. The couple of architects designed a little pavilion surrounded by a sand patio. The interesting side of these elements is the poor materials used such as a three walls structure in low quality wood and a corrugated plastic roof. In addition, reflective panels allow the visitors to see their reflection projected in this space. There are three concepts that they wanted to represent: space, shelter and privacy. Their design was a criticism of the optimism of the Modern Movement and of the emptiness of those who were realising geometric building with abstract principles. While the architects Smithson took care of the design of the structure, Paolozzi and Henderson had the task of “furnishing” the interior. They chose to display objects that allude to the human activity: a wheel which describes movement, a sculpture to stimulate contemplation, the collage of a head to indicate the Human and debris to remind a post-war/post-atomic condition. 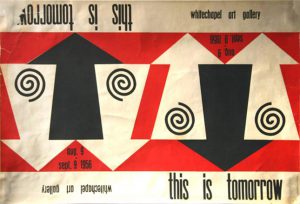 In conclusion, ‘This is Tomorrow’ still marks today an important event for the history of art in the United Kingdom. As the closing line of the Pathé newsreel says, “Strange, exasperating, too much for some people to swallow. But giving everybody something to think about” (6) is the perfect description of what probably most of the visitors in 1956 thought and felt visiting the show. About 5 years before, another exhibition called ‘Festival of Britain’ took place in England and had the same purpose as ‘This is Tomorrow’, which was being a “tonic for the nation” (7) and an optimistic celebration of the potential of everything modern. Instead, “the idea that the festival could have a beneficial effect on the entire nations people seems fairly naïve today, and was no doubt inspired by the example set by America. A prosperous nation that was highly modern and consumerist, how could a war-ravaged austerity Britain not look up to America? ‘This is Tomorrow’, coming a few years later and organised by a collection of angsty intellectual anti-establishment artists, seems more of an appropriate fit for 50s Britain than the ‘Festival of Britain’ ever was” (8). ‘This is Tomorrow’ was an amazing starting point and inspiring for astists, whose influence and impact can be clarly observed in posterior movements such as Pop Art in USA.